The Dream of the White Sphere 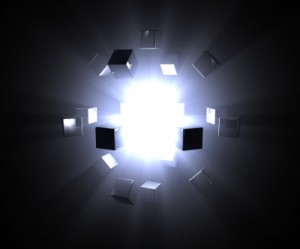 For five consecutive nights I traveled, tightly cocooned within the white sphere.  As I traveled around the world, it took me five nights to roll everything flat. Hills, mountains and other geological contusions were rolled flat under the sphere. Eventually I was left with only myself and my sphere to flatten. To complete what I’d begun, I conjured up another white sphere to flatten the first. One sphere flattened the other, but I was still left with a white sphere. So I conjured up yet another sphere. Again, one sphere rolled over the other; but I still had one sphere in my possession, one ugly lump on an otherwise unblemished landscape; a white stain on an otherwise unsullied blackness.

I could spend the remainder of my nights attempting to erase my creation, but something would always evade my powers of destruction. The task was beyond my abilities. I was presented with a puzzle I could not solve. So how was I to clear away the stain I’d left behind? The conjurer can invent a sponge to soak up the stain, but the conjurer is confronted with the riddle of the sponge. How to dispose of the unwanted sponge? Regrettably, the conjurer solves one riddle by posing another. The sponge cannot imbibe itself but, rather, remains both an affront and a reproach.

So I am left with the puzzling presence of a solitary sponge (no longer a sphere for I have ordained it so). It has occurred to me that the problem lay not in the sponge but within myself. The sponge can absorb and take into itself all that I conjure up; but, to accomplish that, the conjurer must command it to do so.  I must act, and, by acting, I create something new. The conjurer can’t destroy without creating, cannot eat without leaving something behind. Therefore, I have concluded that the conjurer must renounce his calling, and refrain from conjuring altogether. The conjurer must take up the task of elimination, of voiding and abjuring the creative vocations. The conjuror must never again conjure up another sponge to eliminate the other sponges; rather, he must eliminate the sponges himself.

So I did just that. I undertook to ingest the sponge myself. I licked up the sponge and swallowed it. Once done, nothing remained but myself. I had, after all, absorbed my final creation. I’d destroyed all that I’d created but, even though I’d renounced my vocation, I remained a conjuror; and my ability to create again still haunted me. My creative capacity presented me with some rather alarming possibilities. Would I never cease to create?

But I’ve done it. The puzzle has been solved. The final solution, the solution to all of my creative woes, is to eliminate the conjurer. I must ingest myself.