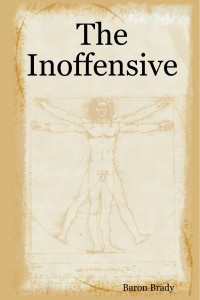 Although every good story should have a beginning, I don’t know precisely how to begin mine.  I could ponder the conditions and circumstances of my birth, but I won’t. I’ve intended this as a factual record of my transformations, and not as an imaginative digression. And, mind you, I use the word transformations because that is how my peculiar abilities have been described. You might also call them startling metamorphoses, but for me they couldn’t be more ordinary.

But I’m getting ahead of myself and I’ve already forgotten to begin at the beginning. It’s where all good stories should begin. Now I’ll say it once and I’ll say it again, this is a factual account and not fevered product of an unhinged imagination. If I will ever succeed in winning your acceptance, I must tell my story as you will understand it, with a beginning and an end, even though I had no real beginning as far I can remember.

THE INOFFENSIVE: a novel / completed 1998

THE INOFFENSIVE tells the fantastical story of a man who could have whatever he wanted, but who, instead, winds up with nothing. The novel takes the form of a dialogue between narrator and reader, in which the narrator addresses the reader by adopting the guise of a changeling: a being who is nothing more than what people imagine him to be.

As a changeling, the narrator is a man who has no identity of his own. He’s a man who defies comprehension because he possesses none of the trappings of humanity and because he exists only by virtue of your imagination. He’s a myth immortalized by dreams. He can appear to be everything to everyone; and yet, in reality, he is nothing, because his existence depends entirely upon what others can see and feel.

The narrator renders an account of a life lived in disguise as a human being. And he describes how he borrowed the identities of the people around him, clothing himself in stolen skins and moods. He misled everyone into believing him human and he has lived in fear of being found out, and of being recognized as a counterfeit human being.

The narrator begins his life inauspiciously enough, having been abandoned as a child, until an artist and his actress wife find him and raise him; but death will claim this sympathetic couple early. And so the narrator moves in with a relative of his adoptive mother. But when his new guardians regard this peculiar changeling with disgust and fear, he decides to run away to confront his destiny alone.

Destiny will make an actor of him; and, on account of being a changeling, he becomes one of the most accomplished of stage actors. After all, he is quite adept at playing many roles. And so he lives an exemplary life, at least until he falls from favor, after publicly admitting to being a changeling.

But he’s too obsessed with what it is to be human to hide for very long; and he once again applies his changeling abilities to becoming a celebrated doctor and then to becoming a candidate for mayor. But it’s only a matter of time before he is, once again, unmasked by the truth.

He has been condemned by mankind to obscurity. But the narrator wants to be forgiven for any lies he may have told in order to render himself more likable. And he hopes to be accorded all of the rights and privileges of being human. For it is his ambition to be human, though humanity is the one thing he can never possess.

The narrator has lived his life so as never to offend, and to be loved by everyone; but he has succeeded only in offending everyone. He wants only to be recognized and remembered, even though he possesses no physical identity by which anyone could recognize him. But, to his infinite disappointment, he is Nobody. And he’s nothing more than a desire for life, a possibility of happiness and a hope of something better.