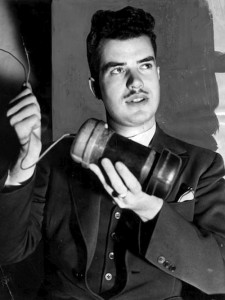 Jack Parsons dreamed of manned flights into space and people walking on the moon. In the 1930s,such aspirations were the stuff of science fiction. His commitment to the study of sustained rocket flight triggered the development of the first jet engines. Jack didn’t do it for the money or the fame. He did it for the glory of accomplishment.

Babalon takes us on a journey into the ambitions of a man who wanted everything and believed he could get everything too. Persuaded to sill his interest in Jet Propulsion Laboratories (JPL), the company he co-founded, Jack sets out on a Faustian quest for total knowledge. His inspiration is Alistair Crowley, an equally ambitious man who encouraged his followers to confront freedom without fear. The two of them never meet but Crowley still manages to entice Jack into the world of secret societies and spirit invocations.

Jack’s relationships with women are passionate yet fleeting. Nonetheless, its women who, like his mother, are able to give him some semblance of connection in an increasingly isolated existence. Eventually, he obsesses over the occult figure of the scarlet woman, determine to find her incarnation. It’s his ambition to have a child with this woman, since its his belief that she will give birth to Babalon: the spiritual messenger of a new awakening, a figure destined to lead humanity from war and destruction to empowerment and knowledge.

In his quest to change the world, Jack attracts the interest of the imaginative and vainglorious, men like L. Ron Hubbard who pushes Jack deeper into the bottomless depths of his own chaotic imaginings. As the two of them attempt to conjure Babalon into the world, the consequence is desolation and loss. It isn’t long before Jack Parsons inadvertently takes his own life in a jet fueled explosion.

The story of Jack Parsons is the story of the twentieth century, its wars and its flights to the moon, its violence its hope for a better future.