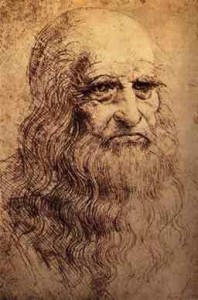 The story of Da Vinci’s Angels follows in the footsteps of eminent sixteenth-century painter and biographer Giorgio Vasari as he attempts to piece together the life of Leonardo Da Vinci. But facts are sparse, making the task of understanding the famed artist a matter of some difficulty. Even Vasari’s plan to conclusively identify the sitter for the painting the world has come to know as “The Mona Lisa” becomes an impossibility.

It’s 1547 and Vasari meets with Francesco Melzi, Leonardo’s factotum and assistant in his final years, only to discover a woefully absent-minded old man who remembers little in the way of facts. What Melzi reports reveals more about him and his relationship with Leonardo than about the artist himself. Desperate for an objective account of the man, Vasari presses, but what he received are fragments of memories, often incomplete and even occasionally contradictory.

While Melzi pores of the notebooks Leonardo left him in his will, he experiences the past for himself, hearing the sage advice of his teacher, as if for the first time, and even picturing him in his mind’s eye. He remembers his master’s disgrace in Rome and he remembers accompanying him for France, serving as a painter for the court of King Francis I for several years until his death. What he doesn’t remember is the identity of the woman in the painting known as the Mona Lisa, the very painting Leonardo sold the French king.

Melzi speaks of Leonardo’s inexplicably contentious relationship with his former pupil, the ne’er-do-well Salai only to reveal, much to Vasari’s disappointment, that Salai had been killed in an altercation years before; making Melzi the last person alive to have known Leonardo personally.

Vasari leaves for Milan to learn what he can of Salai, Leonardo’s closest companion for close to twenty-five years. But his meeting with a woman who claims to be his sister confirms the worst. Salai is long since dead; though a peculiar old man who has taken to following Vasari says otherwise, and that not only is Sali alive and well but that he is the very Salai who served under Leonardo Da Vinci.

Skeptical of the old man’s claims, Vasari is nonetheless eager to learn what he can from the man; and as they seat themselves before Leonardo’s mural of the Last Supper located in the refectory of a monastery. An unwanted child of impoverished parents, the once beautiful Salai struggled to make ends meet as a pickpocket before attracting the painterly eye of Leonardo. As Leonardo’s pupil, Salai was a reluctant learner and quickly wrecked havoc in the artist’s studio; but the pair were inseparable, connected by a bond of unspoken empathy; both of them lonely and both from broken homes, but both as temperamentally different as night and day.

While the man claiming to be Salai speaks of Leonardo’s unfinished commissions for the Duke of Milan, his fascination with developing various flying machines, his study of human anatomy, and his work as an engineer for the likes of the unsavory Caesar Borgia, an unexpected portrait of Leonardo begins to emerge: that of a man half-hearted about his art and far more interested in extending the bounds of all human knowledge and experience. But Vasari refuses to be derailed and presses the old man to be more forthcoming about Leonardo’s art and to divulge the true identity of the woman in the painting purchased by the king of France.

What the old man tells him is that the sitter isn’t the woman he thinks she is – a married woman by the name of Mona Lisa Giocondo – but perhaps rather that of a mysterious courtesan who spent years with Leonardo as one of his closest confidantes. The old man details the curious relationship which developed among Salai, Leonardo and the courtesan, one which would drive the three of them apart.

Growing increasingly impatient with Salai’s peculiar and fanciful stories of flying machines and mystery women, Vasari demands clarification on the identity of the painting. But the old man takes a perverse delight in confusing matters further, informing Vasari that the painting wasn’t so much a painting of the courtesan but a self-portrait and a painting of himself and of everything important to him.

Vasari leaves the old man, determined not to believe a word of the account but to report the identity of the painting as that of Mona Lisa Giocondo. Salai’s memories seem anything but fanciful and turn out to be quite revealing about not only Salai and Leonardo but about the woman who played a potentially significant but hitherto forgotten role in both their lives.